Home » Advice Centre » News: Why is the UK Divorce Rate on the Decline?

News: Why is the UK Divorce Rate on the Decline?

The latest UK divorce rate figures show that there were 90,871 divorces of heterosexual partners in 2018 — a decline of 10.6% from the previous year, according to the Office for National Statistics (ONS). This is the lowest number of UK divorces for 50 years.

What might have caused this drop? And should we expect such a decline to continue? This article will explore why the UK divorce rate has plummeted to its lowest level for half a century.

Divorce in the current day

Many people have admitted to feeling ‘stunned’ upon hearing how many marriages end in divorce. Official statistics from the ONS state that 42% of all marriages in the UK end in divorce, though this number looks to be decreasing.

2018 saw just 7.5 divorces per 1000 married men and women, compared to 8.4 in the previous year. Couples were married for an average of 12.5 years before getting a divorce, according to official figures. 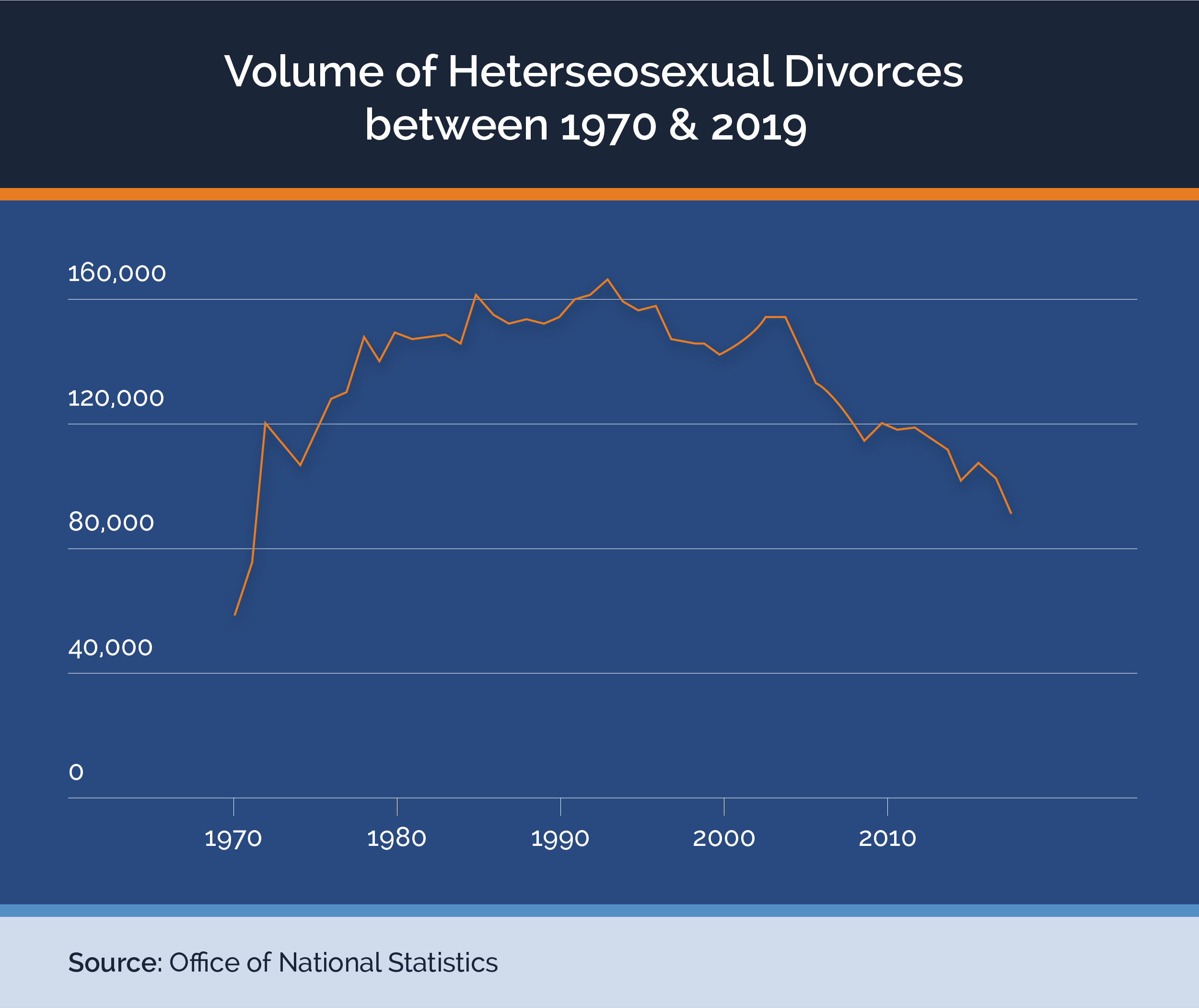 A decline in the divorce rate is not uncommon; 2017 was the only year this decade to report an increased divorce rate from the previous year. Aside from this anomaly, the trend is clear — fewer and fewer people are getting a divorce.

This begs the question — why?

Reasons for UK divorce rate on the decline

Perhaps we are asking the wrong question. Instead of asking why fewer people are getting divorced, we should instead be asking why fewer people are getting married. There is no divorce without marriage, and the marriage rates for heterosexual couples in 2016 were lower at all ages compared with 2006 (except for men aged 60 years and over and women aged 50 years and over), according to the Office for National Statistics (ONS).

Marriage is not as important as it once was. Many couples are choosing to cohabit without going through a wedding ceremony. There are various reasons for this, including:

2. A backlog of divorce petitions

A drop in marriage rates may account for a general trend in lower divorce rates, but why did the rate of divorces in 2018 drop so sharply? The answer may be administrative more than social.

The Office for National Statistics (ONS) stated that the decline in divorce was more pronounced because 8% more divorce petitions were processed in 2018 from a backlog of cases the year before. This may have skewed the statistics.

The future for divorce

Online dating is not a new concept, but only in the past decade has it become ubiquitous, especially among the younger generation. Since its inception in 2012, Tinder has been downloaded over 200 million times across all platforms and the stigma of online dating has abated. People are finding partners online now more than ever, as seen in the graph below. 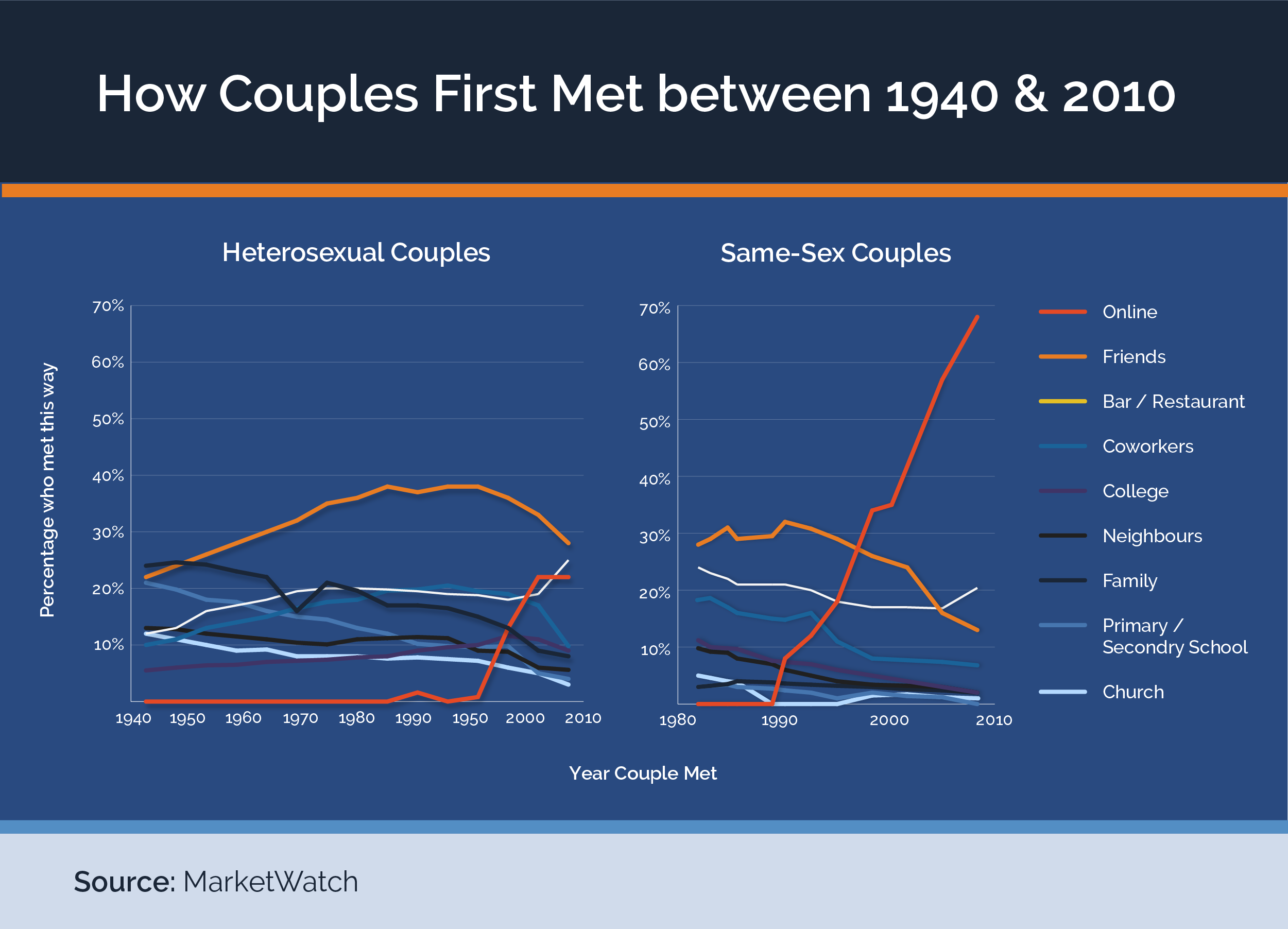 EHarmony suggests that over 50% of couples will meet online by 2031, but will this have an impact on divorce rates?

Though no official data has corroborated this theory, some believe that the rise in free and accessible online dating platforms may have caused, or cause in future, a lower rate of divorce. The idea is that people have easier access to a large pool of potential partners than was available to people 10 or 20 years ago. Having more people to choose from entails a higher chance of finding the right person, leading to a greater quality of marriage and a lower chance of divorce.

Others, including Match.com CEO Sam Yagan, argue that dating cycles are shorter online. Many people feel that the greater pool of potential partners will entice daters to leave troubled relationships more quickly, leading to a higher rate of divorce in the future.

Only time will tell which of these hypotheses become reality.

At Goodwins Family Law Solicitors, we continually analyse all the latest divorce statistics and trends to ensure our knowledge, advice and services stay modern and relevant. If you’re looking for a divorce, we offer competitively-priced representation across the UK and abroad. We have over 25 years’ experience in divorce law and an excellent client satisfaction rate. Visit our family law services page or contact our team today for more information.